Showing posts from March, 2009
Show all

I saw an old motel converted into apartments. The motel was in a U-shape with a big parking lot in the center. Their used to be a swimming pool, but that had been filled and a cement slab poured over the top. At the front of the property there was a large city dumpster.

In this parking lot, I saw a Dad and 2 little boys playing basketball. The only thing they had for a basket was the dumpster. The Dad was making the boys work hard to get the ball in the dumpster.

They were finding joy in that moment and I wondered why we sometimes require so much when so little can bring joy.
2 comments
Read more

A chance to make a difference 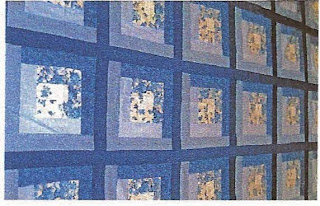 This is a friend of mine -- you may want to help. I know the quilt will be perfect.

"Our triplet daughter, Tonya, has no choice but to undergo another total jaw replacement surgery on March 2, 2009. It will be the 7th time she has undergone jaw surgery. Dr. Day, a Maxial Facial Surgeon, is one of five surgeons who performs this type of surgery in the world, attempted to pin and put a plate in her left jaw to hold it in place in June but that surgery failed. The only option now is to replace her left jaw with the same titanium parts that he earlier surgically placed in her right jaw in 2006.

Tonya does have health insurance, but no pre-existing condition is covered. The costs have been astronomical and we are still paying for previous surgeries. So! I thought of a quilt raffle and wanted to include all of you!! !

A brief history of Tonya's jaw:

Tonya wrecked on her bike and cut her chin open when she was 10 years old. The doctor stitched her chin up, but there was extensive damage…
2 comments
Read more

I Thought I Dodged The Bullet

I thought I dodged the bullet, it only cost me the price of a car wash and carpet shampoo.

Suddenly my gear shift would not go out of Park unless I warmed the car up. Not putting two and two together, I took it to Lexus to find out what was wrong.

Rick (from Lexus): "We took the whole gearshift box apart and my guy says it looks like someone got soda down in there."

Me: Oh my gracious. I spilled 88 ounces of soda in my car, I bet that's when it happened.

Rick: Yup, that would do it.

Me: How much is that going to cost me?

Me: What happens if we don't replace it?

Rick: Eventually, you won't be able to drive the car.

Me: Yikes. I guess there will be no more drinking soda in the car.
1 comment
Read more
More posts