Showing posts from December, 2008
Show all

Finding joy is not so hard 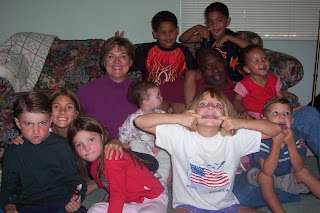 This is a picture of one of the joyeous moments in my life. I recently found the wonderful list of reminders on finding joy:

Surround yourself with color--use colors that make you feel goodStart or keep us a blog--express yourselfSchedule guilt-free indulges--like chocolateSwap CDs with a friend--find out a little about them through musicBe more spontaneous--do something at the last minute just for funSpread cheer--smile at strangers, give compliments, be a good listenerThink like a kid--make up a holiday to celebrateFind the humor in it--whatever it is, find a reason to laugh about itMake one new friend--only one if it is going to be a true friend, not just an acquaintanceGet more sleep--at least 7 hours a night, lying in bed relaxing while you fall asleep countsPut your right brain to work--create an artists wall of your own work and change it oftenHave a pot luck with friends--strengthen the bonds of friendships and include your new friendExplore your hometown--you should know all a…
1 comment
Read more

Christmas 2009 at our house

This morning, I had to be at work starting at 7:00 a.m. I started out as usual going north on 19th Ave. As I approached an intersection, I looked over and saw that QT gas was $1.74 per gallon. At the last minute, I thought, "I'm half empty, I'll just pull in and get gas now."

I pulled in. Got out of my car as the light turned green. As I began to slide my card I heard a huge crash behind me. At the intersection where I would be waiting, there was a 4 car accident.

A car was headed west and turning south in front of where I would have been parked at the light. The light had turned red. Another car going east, ran the red light and hit the turning car. The turning car ran into the car where I would have been and because the two cars behind it had pulled up too close--the first car was pushed into the second car and the second car pushed into the third car.

If you are reading this, remember, wh…
3 comments
Read more
More posts