Showing posts from August, 2009
Show all


One year, when my brother and I were both married and living in Utah, Digger began a campaign for new boots. He would say, "Boy I sure would like some rough out boots." And then in a few days, "I have always wanted a pair of rough out boots." And so on, for about 4 or 5 months before his birthday.

Digger was never one to ask for anything, so I'm sure in retrospect he was not hinting for us to buy them for him. Rather, he was talking himself into it.

If you don't know it, rough out boots are brown and they have a rough leather exterior like unfinished leather. Well, not that rough, but anyway, they are not smooth and shiny.

So, my brother and I went together on our struggling college budget and bought him a pair of brown rough out boots, just like his shiny black ones, only brown and rough out.

We all met at his house and had lunch, then he opened his present and put the brand new brown rough out boots o…
Post a Comment
Read more

My email address is grandberry at gmail dot com. 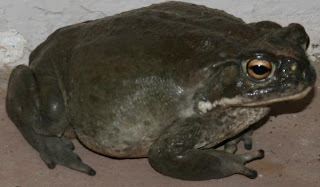 No, Tarzan is safe, he loves Oscar too...

Tarzan walked outside and turned back to tell me "Oscar's back."

I stepped outside and sure enough, there was Oscar just sitting by the house, like he does every spring and fall.

We always muse, "Why does Oscar come up here every spring and fall?" I turned to go into the house and noticed something on the bottom of the door. I looked closely and saw a scorpion with a BODY THE SIZE OF A QUARTER. (Insert ooos and yucks here)I calmly said, "Tarzan, look at the bottom of the door." Tarzan moved quickly, and manly when he saw it. He took a broom and swept the scorpion outside and then beat the living daylights out of it.We then both -- at the same time -- (I love it when that happens) looked at Oscar and then back at the scorpion and said "oooooooooooh." (You have to say that starting low and then making your voice go up and then back down)Tarzan took the broom and swept the now deceased scorp…
Post a Comment
Read more

- August 25, 2009
You know there is a rule of thumb on whether or not you can afford to buy the kewl thingy there in Ikea that you just have to have.

It is called cost-per-use. You figure out how many times you will use the item and divide that into the cost if the item to figure your cost for a year--as an example...

I had to have a fancy delux vacuum that all the young girls in the ward were talking about. So, it cost me (because I got the really fancy one) about $500. I vacuum about 150 times a year. If I have the vacuum one year, it costs me $3 each time I use it. If I keep it for 5 years, it costs me 66¢, now that makes it a bargain.

However, here is a good one, you want a new blouse, it costs $50. You may wear it 10 times in a year, less if you have lots of cloths. At $5 a pop, that is an expensive blouse when you could go to a discount store like Ross and get a perfectly good blouse for maybe $10 and have that cost go down to $1 per use.

I have spent several years in the country, so maybe I'm a country gal. You be the judge...

Tarzan and I had company coming early Saturday morning. Friday night the septic tank backed up. Do city gals have septic tanks?

Anyway, several hours and a few dollars later, it was running again. Thanks you Shad you are the best.

This reminded me of another time and another septic tank in another place where this city gal lived in the country.

The places was Fruitland, New Mexico. We lived on a 2 acre farm with a septic tank. It needed to be replaced, so we hired someone to do it for us. They built it with cinder block and cement. It was all finished...a thing of beauty...the lid was not on yet and we could see that things were flowing into it as they should (sorry if that grosses you out).

- August 20, 2009
"Sometimes, languishing in the arms of your sweetheart for an extra half hour in the morning is the best way to start your day."
Sandi Grandberry
3 comments
Read more 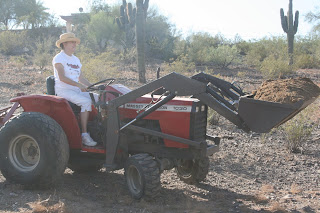 Remember this? Here is the tractor we moved, innocent looking isn't it? She moves with style and grace...did you ever see such a stylish hat for shoveling you know what? See how the hat is tipped slightly to give her some style?No, not turning away from the smell, backing up. In case you don't know old manure doesn't smell bad and this is OLD horse poop. Yeah, she's cool, well, not really, it's 115 ° What would Tarzan do without a good partner?
1 comment
Read more

Miche Bag I have to have one

The Park Avenue Princess is giving one of these awesome purses away. I want one so bad it is silly. This is my favorite shell Miche Bag, Utah based business, unbelieveable idea.
1 comment
Read more

- August 18, 2009
If you are going to be on a committee that receives long, detailed presentations from several different experts in their field, you may need to have some caffeine to survive.
Post a Comment
Read more

I was taking a speech class from Mr. Udall. He had one day a week when you could give in impromptu speech and complain about anything you wanted as long as you did not slander anyone or badmouth any individuals.

It took me about three months to come up with something to say for that assignment. Finally, a couple of things began to bother me so I stood up and said (with my hands on my hips)...

"I've had two things on my chest for the longest time."

Mr. Udall couldn't get the class back under control and I didn't get why they were laughing. I was really hurt that everyone was making fun of me. When I did finally catch on....

What is your most embarrasing moment?
1 comment
Read more

You can't see it in this itty-bitty picture, but I am at 4% of my goal.


It is a life long dream of mine to get my PhD.

I am a person of no particular circumstance. I do not qualify for any scholarships or grants. There is no way I will be able to pay for this education out of my meager State salary.

I am going to start my PhD journey next year. My degree will be a PhD in Higher Educaton Administration.

There are 6 months left to earn the money for my first year.

I would love to have a donation from you.

- August 12, 2009
I saw a purse I want so bad my teeth ache. I love purses. Check it out. You can buy one purse and then change its "cloths" so you have lots of purses and never move your stuff. Last Sunday I was driving without my driver's license because I changed purses and didn't move my wallet to the new purse. 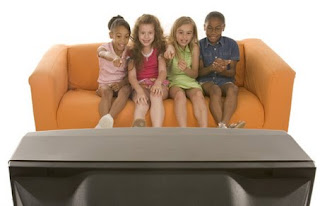 "Teens who watched just 21 extra minutes of TV daily were more likely to become depressed as young adults, compared with those who watched less (2 hours and 38 minutes vs. 2 hours and 27 minutes), according to a recent study. Could it be a chicken-and-egg situation? Maybe, but research did exclude anyone who was depressed at the start. And really limiting the amount of TV anyone watches is never a bad thing."
Woman's Day July 2009
When our oldest child was just 8 years old, our TV "broke" and we just never got around to fixing it. As a consequence, our children played outside, used their imaginations, learned to communicate with other family members, became readers, yes and even studied the scriptures. I highly recommend you break your TV.
The first week is the hardest, the silence is deafening, but the adjustment was worth it.
Post a Comment
Read more 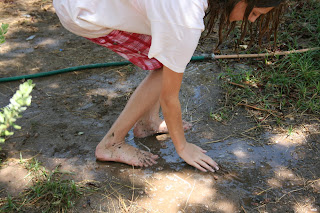 I'm a day late, but you will understand when I tell you that I just spent one week with five of my grandchildren. I was a little busy and a little tired and had quite a bit of catching up to do.


Number of times Tarzan got a personal cool down

168
Number of hours TV was on Disney Channel

???
How many times someone said “Shut the door.”
2 comments
Read more
More posts